The expansion of the invasive plant, Spanish broom, along the Kaweah River in recent years is cause for concern and has captured the attention of those who are considering doing something about it.  In fact, a growing list of individuals, private businesses and organizations, throughout Tulare County have begun planning the launch of “Caring for Kaweah,” a long-term project aimed at river stewardship. 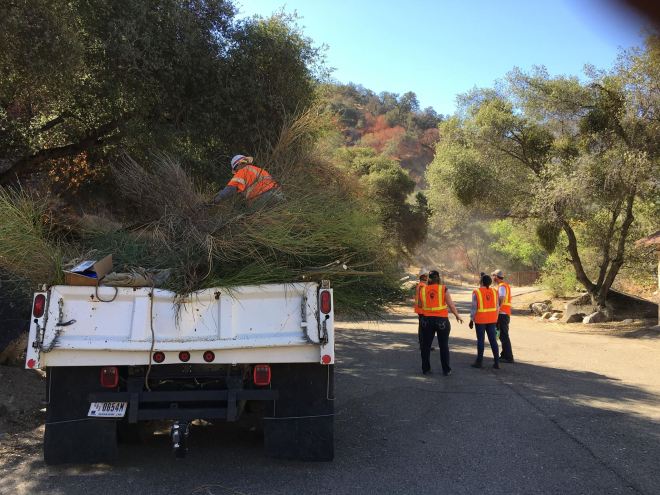 The first of several proposed projects will focus on broom removal and was planned for National Public Lands Day (NPLD).  On September 24, 2016,  volunteers cut, pulled, and removed broom starting in Sequoia National Park and working downriver.  Considering that we rely on the Kaweah River for so much — water, recreation, relaxation, inspiration in addition to commerce, we are pulling together and giving back to keep our river healthy, free, wild, and beautiful.

Many Three Rivers locals and visitors have probably appreciated the colorful spring beauty of the non-native Spanish broom (Spartium junceum) blanketing the edge and creeping up the banks of the Kaweah River. Unfortunately, broom, a native to mediterranean-type climates, is aggressively invasive in our region because the insect pests and pathogens that would normally control its spread in its native range, are not present here. Due to the lack of natural control, it is rapidly becoming dominant in the river corridor, obscuring river views, and cloaking white sand, gravel, and smooth granite boulders under dense scrubby thickets. Recognizing the plant’s capacity to considerably alter the enjoyment and ecology of our Kaweah River watershed goes a long way to temper appreciation of its flowers.

Spanish broom, like other invasive species expanding into the river corridor, poses a significant threat to wildlands throughout California and is quickly becoming a thriving monoculture along the Kaweah River. One needs only to glance at the river in spring to note the extent to which it has spread. Bushes up to 10 feet tall now block views along lengthy river stretches. As broom grows, its vast root system usurps precious water, trapping sediment, altering river flows and obstructing river access to humans and animals alike. Unlike the native willow, sycamore, and alder it is displacing, it provides little in terms of shade. Its alkaloid-containing leaves and seeds are of little value to wildlife. stands of broom pose a significant fire hazard in this land of continual drought.

To participate or get more info, contact Jenny Kirk at jenny_kirk@nps.gov, or call (559) 565-4232. She will provide you with meeting location information for future outings. 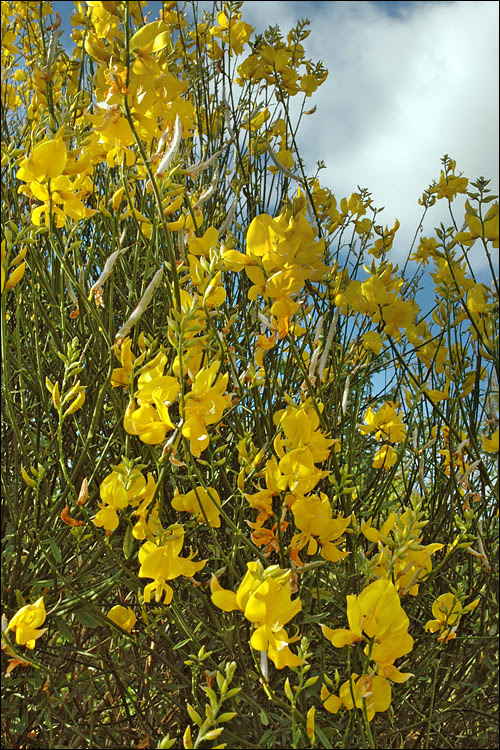 “A World Class Urban Restoration Project”
The Flora, Fauna and Controversies of the Sepulveda Basin
Presented by Steve Hartman

Author and dedicated conservationist, Steve Hartman is a dynamic speaker, who is a native of Van Nuys, and has spent more than three decades watching the native flora and fauna return to the Sepulveda Basin. He has served on the Sepulveda Basin Wildlife Area’s Steering Committee (sponsored by L.A. City Recreation and Parks) since its inception. He has also served on numerous conservation and restoration projects throughout the state. He is currently President of the Board of Directors for CNPS

In 1990, the City of Los Angeles set aside the Sepulveda Basin Wildlife Reserve to protect native plants and animals. Over 200 species of birds have been seen in the basin. Many birds, attracted by the water, gather here in the fall and winter.

Thousands of native plants have been planted in the Sepulveda Basin Wildlife Reserve. Many other plants have volunteered — meaning grew on their own from seeds, underground shoots, or from broken pieces of plant that rooted and took hold. While certain native plants have volunteered (coyote bush, mulefat, California walnut, elderberry, western ragwort, and mugwort), many non-native plants have also taken advantage of disturbed soils or the remoteness of certain areas to invade, and in some cases, threaten to take over the landscape. There are approximately 100 native California plants found in the Wildlife Reserve, and probably an equal number of non-native plants and weedy species.    Since the Reserve is located in a flood control basin that does indeed flood, weed management will be an ongoing practice: every time the Basin floods, every weed seed (and native seed as well) in the upper Los Angeles River watershed gets caught in the Basin. As the flood waters recede, a one-half to one-inch layer of silt is left, covering up every portion of the Basin that was flooded. This silt layer is the perfect example of exposed disturbed soil, the kind of condition that weed seeds are highly adapted to and thus can easily germinate…that is, if the seeds are also exposed to light. So weed management will be a continuing effort in the Basin.

There are scant historical records depicting the habitat of the Sepulveda Basin before it was dammed in the 1940’s. While the soft-bottomed portion of the Los Angeles River has always been a “wildlife area,” it wasn’t until the late 1970’s when the Army Corp of Engineers began to revegetate the east portion of the Sepulveda Basin with California native plants. Since then, the 200-acre Wildlife Reserve was established and the Bull Creek Ecosystem Restoration Project was completed. Alas, in December of 2012, the Army Corp destroyed 43 acres of wildlife habitat.

Located in the San Fernando Valley near the intersection of the 101 and 405 Freeways, the 2,000-acre Sepulveda Basin Recreation Area is a flood control basin managed by the Los Angeles City Department of Recreation and Parks. Features include two parks, an 80-acre sports field, an archery range, three 18-hole golf courses, Balboa Lake with boat rentals and fishing, the Balboa Park and Sports Center, playgrounds, a velodrome, bike paths, hiking trails, tennis courts, a Japanese garden, an off-leash dog park, a premiere wildlife preserve, and the only unpaved stretch of the Los Angeles River.

The Alta Peak Chapter held a fun and successful landscaping workshop at the College of the Sequoias in Visalia on Saturday, August 27. Taught by Alta Peak Chapter native plant horticulture experts,  Melanie Keeley and Cathy Capone, the workshop focused on techniques for converting lawns and more thirsty landscaping into drought tolerant native plantings. While many Mediterranean plants around the world are grown successfully in our area, they don’t have the conservation and habitat values that our native plants provide. In at time when many animal species are in decline, providing habitat for insects, birds, and other animal species is more important than ever. Additionally, many native plants originating from outside our area or grown elsewhere and brought in, fail to thrive in our hot, arid climate.

A favorite part of the workshop was a slideshow presented by Melanie, where she showed us her favorite plants that have done well in the local area. For example, she mentioned a barberry, Berberis aquifolium ‘Compacta,‘ a low growing plant successful in dry shade. In addition to being a good plant for under our native oaks, the plant in different seasons is attractive to hummingbirds, butterflies (flowers) and other birds (fruits). Fall foliage color change is an added bonus. Another favorite mentioned was St. Catherine’s Lace, Eriogonum giganteum. Although a California native not from our local area, it has proven successful here and provides an extraordinarily long season of bloom.

Part of the workshop consisted of the nineteen participants using plans and photos of their own yards to design new landscaping. People did a lot of sharing of their own situations with the hopes they had for their new gardens. It was exciting to hear all their ideas and challenges. A side bonus was that the workshop attracted twelve new CNPS—Alta Peak Chapter members, including two who came all the way from Fresno! The timing is perfect for participants to order plants for their projects from the upcoming Alta Peak Chapter annual native plant sale coming on October 1, 2016.
Happy Planting!

Members of the California Native Plant Society can pre-order plants with a 10% discount. Order forms must be received by September 23, 2016.
Download 2016 Pre-Order Form 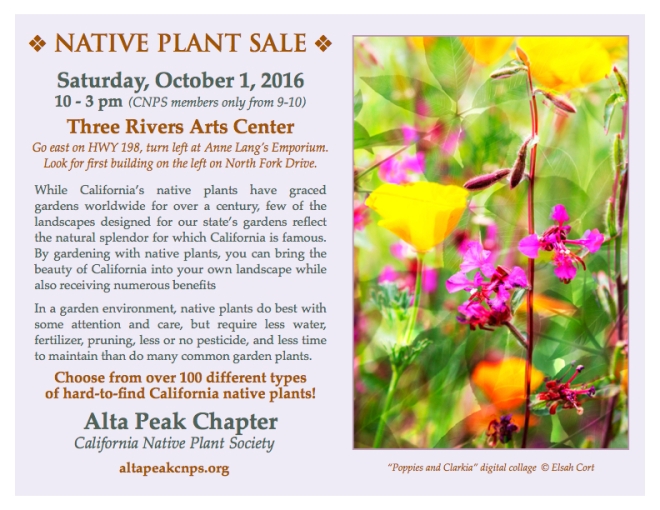 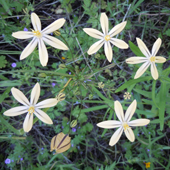